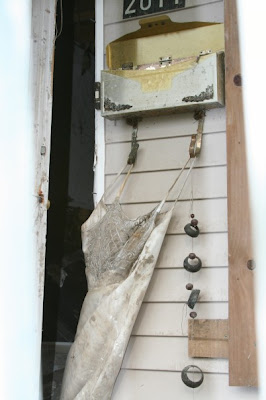 Inspired by others who have done the same today, I thought I'd recount some of my experiences following Hurricane Katrina. When the hurricane hit, I'd just started a grad program in Abilene, Texas. Like most people, I couldn't take my eyes off the constant coverage of the disaster. I wrote this blog entry a few days later:

I got the chance to watch Oprah this afternoon. I usually don't watch the show but I happened to see that she would be talking about the Hurricane, so I tuned in. The current conditions of the people living in Louisiana are unbelievable. Dead bodies are everywhere. If a person is about to die, they go ahead and take the body to the make shift morgue so the person can die in peace. What a tragedy when the morgue is the most peaceful place to die. Oprah got to go into the Superdome and there was water, urine, and feces covering the floor. Thankfully, no one is living there any more. As I watched the show I felt so helpless. All I want to do with my life is love God by loving and serving people. I wish so badly that there was something I could do to help these people. I just feel stuck here.

I titled that blog Helpless and I remember feeling so helpless at the time. Here I was sitting around the Graduate School of Theology with a bunch of future ministers talking about what it means to live an incarnational life, all the while thousands of people were one state away and living without water. Sometimes it feels like the Christian walk is so much talk and so little action.

Thankfully, I was able to put that Christian walk into action several months later when I traveled to New Orleans with the youth group I was interning for. It's funny, at the time I had no idea I would soon be working with that youth group full time. I was very nervous about that trip to New Orleans. I had broken my foot a few weeks earlier and I knew I would be very limited physically. I certainly was, and again felt such a feeling of helplessness as I watched my teens work so hard. I remember having so many thoughts and emotion swirling around in my head and heart. Here's the blog I wrote soon after we returned:

We returned from New Orleans a couple of hours ago and I have so many thoughts. I know my words can't really do justice to the experience I just had, but I'll try.
First of all, I have to brag on my kids. They were awesome, bigger than awesome. Our job was to go into these houses that hadn't been touched in 10 months and clear out all of the belongings- couches, dressers, refrigerators, clothes, books, food, EVERYTHING, then we had to strip the house down to just the studs. The church we were staying at and working through expected our group to get three houses done, my incredible kids got ten houses done. That's more than any of the groups that have come through that church. I didn't hear the kids complain about the work a single time. We had to force them to take water breaks. They wanted to stay and work as late as possible each day. I am so proud of them.
When we got to New Orleans we went down to the French Quarter which didn't seem to have much damage from the hurricane. This area is very old, it looks like old cities in Europe (at least what I think those cities look like). New Orleans definitely rivals Las Vegas for the title of sin city. The closer you walked to Bourbon Street the stronger the smell of alcohol got. I'm sure my teenage boys got an eye full more than once. There was an overwhelming feeling of loss and hopelessness in the city. The people are weary and tired.
When we left the French Quarter we took the kids down to the 9th Ward, a poor neighborhood that was pretty much wiped out by the storm. The destruction was worse than I had imagined. We saw houses that were literally turned over on their side. The few brick houses in this neighborhood held together pretty well, but all of the other houses were completely lifted off their foundation. The flood water was higher than the roofs and didn't start going down for at least two weeks. Nothing and no one survived this storm. Each house had a spray painted number on it of the number of bodies found in it. This place was a ghost town. There was not sign of life anywhere. We drove down one street and saw a man working on his house. We got out and talked to him and prayed with him. He told us about an decorative angel that was on his roof that made it through the storm and still sits on the roof. There are signs of God everywhere.
The neighborhood we worked in was an average middle class area. It reminded me of the neighborhood I grew up in. Just imagine your house submerged in water for two weeks then left for 10 months. Everything was still wet, covered in mold, and completely filthy. I've never seen anything this nasty. We had to wear masks to protect our lungs and prevent nose bleeds. I just pray that our kids didn't breathe in anything that will affect them later. Our homeowners didn't know what they were going to do. It hasn't been decided whether these neighborhoods will be rebuilt or just completely demolished and returned to marsh land. I kept asking myself, who would build a city on a swamp?
I still have lots of questions and unresolved feelings about New Orleans. I'll probably write more about it. The one thing I know is this city must be redeemed. Not just physically, but spiritually, emotionally, and mentally. That is my prayer for New Orleans.
Watching the news coverage about Katrina this week has filled me with the same emotions and questions I had 5 years ago. So many feelings about the importance of home in a person's life, the value of under-resourced (poor) people in our country, the appropriate response of government in situations of disaster as well as the response of churches and Christians.