I decided to give up my unnecessary internet stuff for lent this year. That would include this blog (and reading all of yours). For my Mardi Gras celebration I just played an hour of Yahoo's best game: Chicken Invaders. Have a great season. See ya after Easter. (I will be checking my email at suemullican@yahoo.com)
While I'm gone, I'll leave with a great picture from McDreamy's Can't Buy Me Love days.

It's official. My decision making process is over. I will be spending my summer in Kansas City at the Overland Park Church. I know this will be a great opportunity for me. It's hard to make these types of decisions because I know I will be blessed no matter what I do. And it's so hard to turn down great churches and youth ministers. I am so blessed to have so many opportunities. This whole process has been so affirming to my call to ministry. The Lord is so good.
Posted by Sue at 9:06 PM 4 comments:

Well, I'm pooped. It's Lectureship week and God is doing some amazing things. Glory to Him. Plus I'm in the middle of internship interviews and it's wearing me out. Three today and six or seven tomorrow. Interview Sue is pretty extreme and she makes me tired. The good thing is I was able to purchase my first suit. I feel so professional. Not that youth ministers care about business suits, but I sure do look nice! I hope all of you out there in blog world are doing great. Good night, sleep tight.

In the last two weekends I have been fortunate enough to go to the variety shows put on by my two schools. Since some of you readers missed these shows I will fill you in.

Master Follies:
What a great weekend. This show was the best one I've seen. Dr. Camp was the director this year and he did a great job. The hosts and hostesses were super. The club shows were a bit disappointing, but at least my old club won! Alumni breakfast was also wonderful. There were so many people there. And, so many babies. There must be something in the water.

Sing Song:
Drama, drama, drama. This year was the 50th show, so everything was a big deal. Plus it's the centennial. The Siggies definitely had the best show, but when the winners were announced, they got 3rd place. The whole audience moaned. As it turns out the scores were miscounted and the Siggies actually won. What a mess. My favorite part of the program was during intermission when the jazz band played the entire Sex and the City theme song. I thought this was a Christian school! (speaking of, I finally got the Sex and the City box set and it is awesome!) Overall, it was a great night. The hosts and hostesses were great too.

It's funny to watch the difference between these shows. It's very easy to see which school is richer!
Posted by Sue at 3:32 PM 5 comments:

Today I got my first pay check from University and it sure does feel nice to have a little money after going six months without any income. My first purchase: Grey's Anatomy Season One!
Posted by Sue at 5:47 PM 2 comments:

Have you ever noticed the great lengths people will go to in order to avoid traffic lights. I've been with people who will drive two or three extra miles just to avoid a single light. Why in the world is that?
Posted by Sue at 5:10 PM No comments:

Today is my dad's 59th birthday. It's weird. I've never thought of my parents as old, but I've always thought of 60 as old. And my parents are knocking on the door of 60. I can't really handle the thought of then getting old. So I'll just sit here in denial and refuse to think about it.
Happy Birthday Pops!

What is it about driving alone that makes you so emotional. I just drove back from Dallas and cried while I was on the road. I never cry, so that's a big deal. Now I'm in this really mellow pensive mood. For some reason this is a common occurrence for me. I'll be perfectly pleasant and then after an hour of driving I start thinking about all of the people I love, and all of my hopes and dreams, and about how I really want to get married, and about the wonders of being a child of God (as well as a child of Betty and Larry) and I start getting really emotional. Does this happen to any of you peeps out in blog world? Or am I just crazy?

Anyways, my class this weekend was great. I met some great people who are ACU students, but don't live in Abilene. I'm really excited about being a minister. I just hope I'm ready when the time comes.

Lastly, here is a great picture of my niece Kaelan. She really is the cutest. She has six teeth now. That is nuts. She'll be one in March. I can't believe it's already been this long. I love this picture because she looks mischievous. This is a quality that she gets from her aunt Sue. 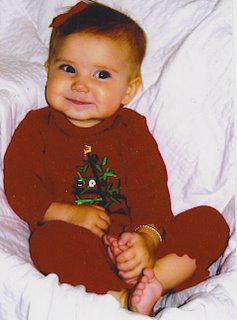 This weekend I am heading to Dallas for a weekend class. This class will teach me how to manage conflict in the church. Is that even possible? Why are churches such an epicenter for major conflicts?
Posted by Sue at 10:40 AM 1 comment:

Hymn to a Good Wife
10 A wife of noble character who can find?
She is worth far more than rubies.
11 Her husband has full confidence in her
and lacks nothing of value.
12 She brings him good, not harm,
all the days of her life.
13 She selects wool and flax
and works with eager hands.
14 She is like the merchant ships,
bringing her food from afar.
15 She gets up while it is still dark;
she provides food for her family
and portions for her servant girls.
16 She considers a field and buys it;
out of her earnings she plants a vineyard.
17 She sets about her work vigorously;
her arms are strong for her tasks.
18 She sees that her trading is profitable,
and her lamp does not go out at night.
19 In her hand she holds the distaff
and grasps the spindle with her fingers.
20 She opens her arms to the poor
and extends her hands to the needy.
21 When it snows, she has no fear for her household;
for all of them are clothed in scarlet.
22 She makes coverings for her bed;
she is clothed in fine linen and purple.
23 Her husband is respected at the city gate,
where he takes his seat among the elders of the land.
24 She makes linen garments and sells them,
and supplies the merchants with sashes.
25 She is clothed with strength and dignity;
she can laugh at the days to come.
26 She speaks with wisdom,
and faithful instruction is on her tongue.
27 She watches over the affairs of her household
and does not eat the bread of idleness.
28 Her children arise and call her blessed;
her husband also, and he praises her:
29 "Many women do noble things,
but you surpass them all."
30 Charm is deceptive, and beauty is fleeting;
but a woman who fears the LORD is to be praised.
31 Give her the reward she has earned,
and let her works bring her praise at the city gate.
Posted by Sue at 1:39 PM No comments: