A few months ago, maybe even a year ago, I told you to check out Obediah Parker's version of Hey Ya. Well last night they played that song on Scrubs! That led me to believe that the producers of Scrubs are reading my blog. I always welcome new readers. :)

I have a little story for you. After church last night I was up in my office and received a text telling me there was a duck under my car. Of course I thought this was a joke. But as it turns out, a little ducky with a broken foot had found its way under my car! Whoa. It was so cute and scared. So, Tim (the other youth minister) called animal patrol, who were not working at 9:00 pm. So the dispatcher sent out a police officer to help us in our time of need. While we waited on the first responder, we noticed an owl, or hawk, or some other big predatory bird perched on a tree in the distance. Back to that in a moment. I expected the officer to put the duck in a cage and take him in for treatment. Instead he scooped him up in a blanket and carried him down to the creek at the edge of the church property. I was a little disappointed in his course of action, but what was I going to do- argue with the cop? This morning Tim and I were so proud of our courageous actions last night. We decided to go down to the creek and check on the ducky. All we found was a big pile of duck feathers. This forced us to believe that owl made a good dinner out of the duck last night. Nature can be so tragic. 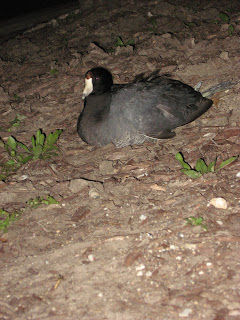 The duck was a little scared of me. I'm assuming this was because of my red eyes. 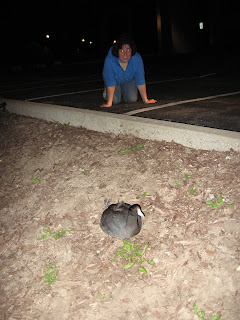 The police officer who led the duck to ultimate death. 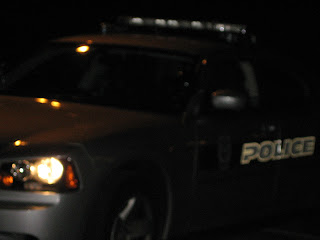 Man, that's a sad story! lol It is funny in a sad, depressing sort of way. Thanks for the pick-me-up.